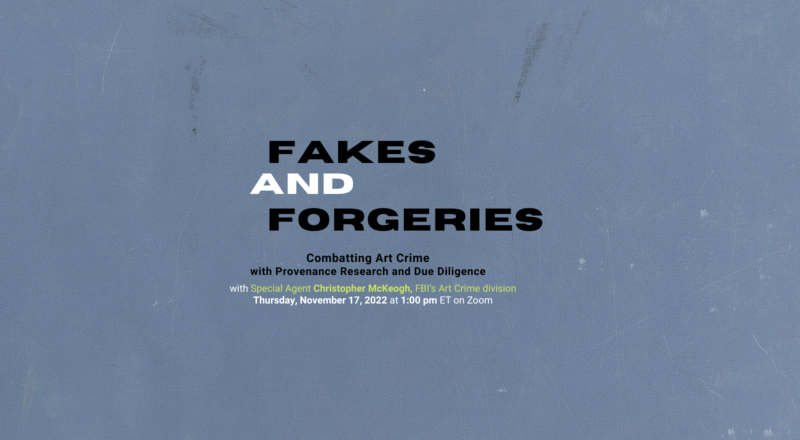 The rise of fakes and forgeries in the artworld is of particular concern to art historians and custodians of art historical archives. Especially with the increasing availability of archival information online, many are concerned that criminals have more access than ever to “recipes” for how to create a convincing fake. But does the availability of such information correlate to an increase of these art crimes? What artists are particularly vulnerable to these attempts, and to what extent should art historians and archives “safeguard” art historical information from potential misuse by the public?

The WPI was pleased to host Special Agent Christopher McKeogh from the Art Crime division of the FBI. SA McKeogh gave a presentation on some of the notable cases he’s seen in recent times, what to look out for, and what art world experts can do to fight back against these fraudulent activities.

This event was not recorded.

Christopher McKeogh is a former university science professor and possesses two Master’s Degrees in Physics. As a Special Agent with the FBI, he has more than 19 years’ experience working National Security, Financial Crime, and Art Crime investigations. Currently, SA McKeogh exclusively investigates art crime matters in the Transnational Organized Crime branch of the FBI’s New York Office. His efforts have led to the arrest and conviction of numerous art crime perpetrators resulting in the disruption/dismantlement of several international criminal syndicates, as well as the recovery of thousands of works of art, from antiquity to modern, valued in the hundreds of millions of dollars.

This event was moderated by Elizabeth Gorayeb, Executive Director of the Wildenstein Plattner Institute, Inc. 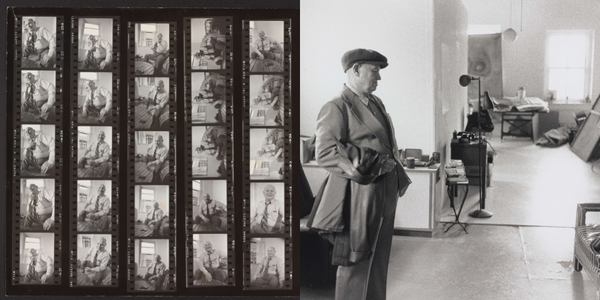 In celebration of the launch of the Romare Bearden Papers on the WPI Digital Archives, the WPI hosted a webinar featuring renowned photographers Frank Stewart and Chester Higgins, Jr., in a conversation moderated by Dalila Scruggs, Curator of Photography and Prints at the Schomburg Center for Research in Black Culture.

Photographers like Stewart and Higgins have created iconic portraits of Bearden which have become synonymous with the artist’s image. Forming part of the rich assortment of photographs available in the artist’s archives, they offer an exclusive look at Bearden at various moments in his career and provide a vital record of African American arts and letters in the 20th century.

Frank Stewart shot his first photographs at the 1963 March on Washington and has gone on to make compelling images ever since. Stewart earned a BFA in photography from Cooper Union in 1975 and counts Roy DeCarara, Garry Winogrand, Jack Whitten, and Romare Bearden amongst his mentors. Stewart was the first photographer-in-residence at The Studio Museum in Harlem, where he also taught photography. He has been a member of Kamoinge, Inc. since 1982, and was the lead photographer for Jazz at Lincoln Center almost three decades. Stewart is widely published, has had more than thirty solo exhibitions and is the recipient of numerous prestigious awards. His work is held in the collections of major museums including Bowdoin College Art Museum, Brunswick, Maine, the Detroit Institute of Arts; George Eastman House, Rochester, New York, the High Museum of Art, Atlanta, the Museum of Modern Art, New York, the National Museum of African American Art and Culture, Washington, DC, and the Studio Museum in Harlem, New York. Stewart is the subject of an upcoming retrospective titled, Nexus: An American Photographer’s Journey, 1960’s to the Present, that opens at the Phillips Collection in Washington, DC, in June 2023.

Chester Higgins, Jr.  is a photographer known for his eloquent images of the life and culture of African Americans and the people of the African Diaspora. He counts P. H. Polk, Arthur Rothstein, Cornell Capa, Gordon Parks and Romare Bearden amongst his mentors. He was a staff photographer for the New York Times from 1975 to 2014. Widely published, his photographs have appeared in magazines including Ebony, Essence, Fortune, LIFE, Look, Newsweek, and TIME, and in several books including Sacred Nile, Echo of the Spirit and Elder Grace. His work has appeared in numerous solo exhibitions, most recently The Indelible Spirit at the Bruce Silverstein Gallery. He has received fellowships and grants  from the International Center of Photography, The Ford Foundation, The National Endowment for the Arts and the Rockefeller Foundation. His photographs are included in the following permanent collections: The Museum of Modern Art, New York, the Museum of Modern Art, San Francisco, the Virginia Museum of Fine Art, Richmond, the Library of Congress, and the Schomburg Center for Research in Black Culture, New York.

Dalila Scruggs is Curator for Photography and Prints at the Schomburg Center for Research in Black Culture. She earned a Ph.D. in Art History from Harvard University, where she focused on African American art. She has held curatorial positions at the Williams College Museum of Art and the Brooklyn Museum, and served as the Brooklyn Museum’s Museum Education Fellowship Coordinator. 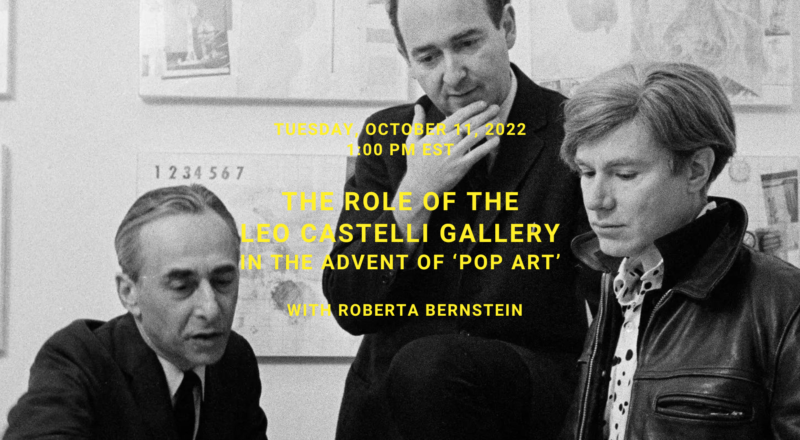 Leo Castelli established his gallery’s direction when it opened in the late 1950s by exhibiting the work of Jasper Johns and Robert Rauschenberg. Their art marked a shift away from the prevailing mode of abstract expressionism by employing objects and signs from the everyday environment, popular culture, and the mass media. By the mid-1960s the Castelli Gallery was considered among the most influential “Pop Places,” exhibiting works by Andy Warhol, Roy Lichtenstein, and James Rosenquist along with that of Johns and Rauschenberg. Bernstein, who frequented the Castelli gallery after arriving in New York in 1966 as an art history graduate student examines the origins of the galley as center for the various directions of Pop, including her personal experiences.

Roberta Bernstein is recognized as the foremost scholar of the art of Jasper Johns. She is author and project director of the five-volume Jasper Johns: Catalogue Raisonné of Painting and Sculpture, including the comprehensive monograph, Jasper Johns: Redo an Eye, published by the Wildenstein Plattner Institute in 2017-18. Bernstein served as a consultant to the catalogue raisonné of drawings published by the Menil Collection. She has written and lectured extensively on Johns and other contemporary artists, including Ellsworth Kelly, Robert Rauschenberg, Andy Warhol, and Marisol Escobar. In 2022, Bernstein was appointed a Chevalier in the French Legion of Honor for her scholarship linking Johns’s art with French artists including Paul Cézanne and Marcel Duchamp. Bernstein is professor emeritus of art history at the University at Albany, State University of New York; she received her PhD from Columbia University. 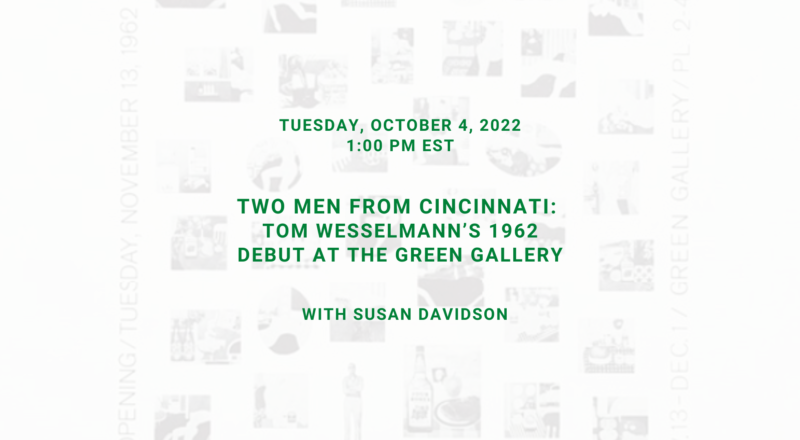 THIS EVENT HAPPENED ON Tuesday, October 4, 2022

Richard (Dick) Bellamy opened the Green Gallery on West 57th street in Fall 1960. The gallery’s first eighteen months experienced paltry sales. However, with the explosive arrival of Pop art in America, the gallery became a go-to-source for the “new” art. Tom Wesselmann’s gallery debut featured his Great American Nude and Still Life paintings that were swiftly snatched up by committed collectors as they vied for the artist’s latest artworks. This webinar draws on the author’s research for the forthcoming monograph devoted to the stylistic development and reception of Wesselmann’s most famous body of work, the Great American Nude series (1961–1969/73).

Curator and art historian Susan Davidson is an authority in the fields of Surrealism, Abstract Expressionism, and Pop Art with an expertise in the art of Robert Rauschenberg. Ms. Davidson is also an accomplished museum professional with over thirty-year’s experience at two distinguished institutions: The Menil Collection, Houston, and the Solomon R. Guggenheim Museum, New York, and its constellation of museums. In 2018, Ms. Davidson established her eponymous firm that produces curatorial projects for international museums and galleries, works with artist’s foundations on building legacy, and provides collection management services for private collectors. Her current curatorial projects include a monograph on Tom Wesselmann’s Great American Nudes and a Robert Motherwell retrospective. 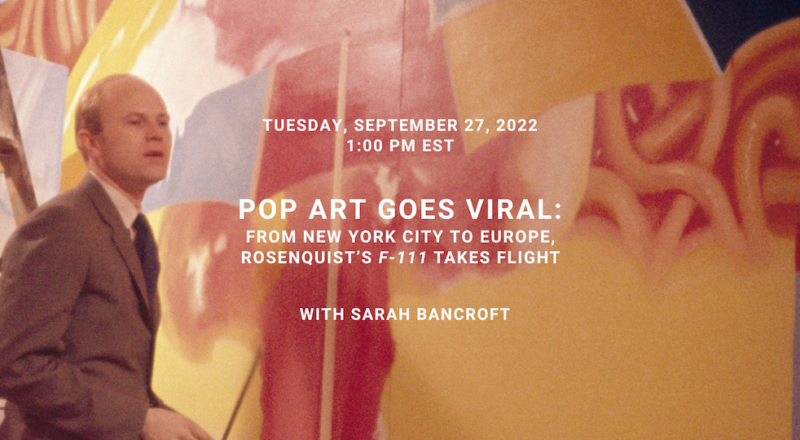 THIS EVENT HAPPENED ON Tuesday, September 27, 2022

In the early 1960s, James Rosenquist was in all the right places. His first Pop art canvases were made at a studio on Coenties Slip, his first show at Green Gallery sold out in 1962, and Rosenquist was included in all the earliest Pop art shows in NYC and beyond. In 1964–65, energy was building around his latest and largest work to date, F-111. With curators, gallerists, and artists amassing at Rosenquist’s Broome Street studio to see the work progress, the big reveal of F-111 at Leo Castelli Gallery in the spring of 1965 was matched by an instantaneous international interest. By September, museum director Pontus Hultén was exhibiting the work at Moderna Museet in Stockholm, Sweden. From there, the work went viral across Europe, a serendipitous journey that sent the work to Bern, Amsterdam, Rome, Paris, and beyond. In Europe, Moderna Museet proved to be a site of influence as strong as NYC, where the primordial soup of American Pop art was first stirred and tasted. This talk explores the people and places that fostered this nascent movement, with a nod to the European distribution and consumption of this dynamic movement. 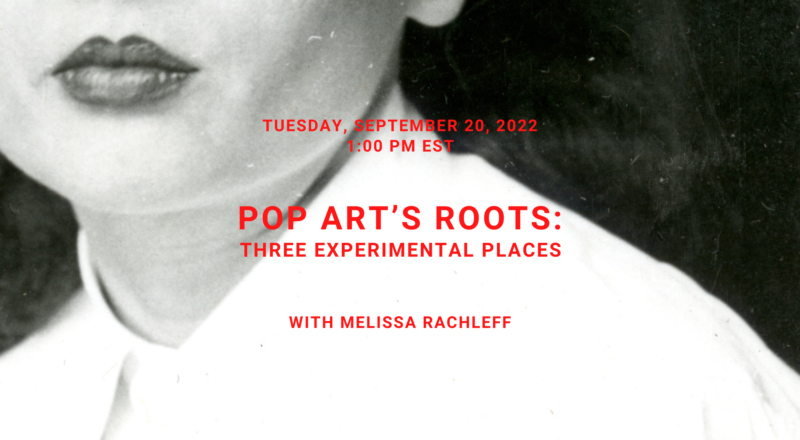 THIS EVENT HAPPENED ON Tuesday, September 20, 2022

In 1990, the art critic David Bourdon told interviewers Billy Klüver and Julie Martin, “In the late fifties I was so interested in what was called Neo-Dada and junk art . . . Pop Art was a little afterthought. It was all this scrap stuff that was supposed to be the big movement. So, I was so amazed when Pop came along and demolished everything else.” Today, scholars are examining the precursors of Pop that so attracted Bourdon. There is vibrant interest in an art narrative that recognizes the aesthetic complexity of the late 1950s and early 1960s.

Rachleff’s presentation explores Pop Art’s origins in assemblage and figuration. In “Pop Art’s Roots: Three Experimental Places,” Rachleff discusses these short-lived galleries where the “Pop” sensibility emerged: Hansa Gallery (1952–1959), Reuben Gallery (1959–1961) and Green Gallery (1960–1965). Throughout the presentation Jean Follett (1917–1990), whose biography Rachleff is writing, is presented as an artist who catalyzed the direct use of objects, an important precedent for the Pop generation.

Melissa Rachleff is a Clinical Professor in the Visual Arts Administration Program at NYU: Steinhardt, where she concentrates on the nonprofit sector. In 2017, she curated Inventing Downtown: Artist-Run Galleries in New York City, 1952–1965 for NYU Grey Art Gallery and wrote/edited the accompanying book, which is co-published by the Grey and Prestel Publishing. Melissa began her career as the assistant curator at Exit Art and co-curated exhibitions on the intersection of visual art and documentation. She has written about artist organizations for a variety of publications, and her essay, “Do It Yourself: A History of Alternatives” was published in Alternative Histories: New York Art Spaces (MIT Press) in 2012. For the fiftieth anniversary of 1968, Melissa curated Narrative & Counternarrative: (Re)Defining the Sixties for NYU’s Bobst Library, based on the school’s three main archive collections: Fales Library & Archive, Tamiment Library and the University’s archive.